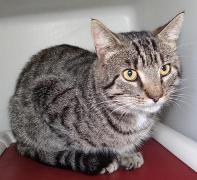 Sometimes it’s easy to overlook Clarence, among all of the other cats at the shelter.

He was abandoned by his former owners and it’s as though he doesn’t want to draw attention to himself. The thing of it is, he’s really a wonderfully sweet and friendly boy.

He’s grateful for attention, and shows it. He doesn’t try to show off, or make waves, or be the Big Man on Campus. He just lets you know that if you spend time with him, he will be oh, so grateful.

If Clarence gets that love and affection, maybe he’ll learn that it’s ok to stand out a little bit.