Cats have lived near humans for over 10,000 years.  Feral cats are the same species as domestic cats, but have not been socialized to humans. They have lived their lives outdoors, mostly without human interaction.  They are not pets, and have adapted to living outside.  Feral cats often live in groups, called colonies (six cats or more).  If left unsterilized, these cats will continue to breed, producing thousands of new kittens each year. TNR has been scientifically proven to be the only effective way to actually reduce the population over time.  It is also the most humane way. 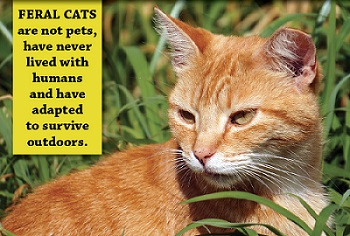 The Brown County Humane Society appreciates the beauty and nature of our unique community and wants to help preserve the natural habitat.  Providing TNR services will help to decrease the population of feral cats over time without needlessly ending their lives.

If you are feeding any feral, stray, or abandoned cats, getting them fixed is crucial to improving their quality of life and managing the population. Two unaltered cats and their descendants can theoretically number 420,000 cats in just seven years.

With TNR, cats are humanely trapped, taken to a vet to be spayed/neutered, given a rabies vaccination, ear-tipped, and returned to their home, where they are ideally supervised by a caregiver.  Any friendly cats, or kittens who are young enough to still be socialized, may be taken to the shelter for adoption.  The ear tip helps identify cats who have been through the TNR process, so that they won’t be put through it again, and lets the public know that this cat is vaccinated and cared for.

Why Can’t the Cats Just be Moved Somewhere Else?

Most colonies have established themselves at a location because they have found it to be a good source of food and shelter.  As a result, if cats are removed, more cats will just move in and take over and the cycle of breeding will continue.  This is called the “vacuum effect” and has been well documented in a variety of species.  By using TNR, the colony population is regulated, the cats are kept healthy, and the population will eventually be reduced through natural attrition.  Any new cats which gradually enter the colony will go through the same TNR process.

Whether you welcome the cats on your property or not, TNR has been proven to be the only way to successfully reduce the population of these cats.  By simply moving them, or catching and killing them, the problem won’t be solved and the effort to remove the cats will be ongoing, costly, and ultimately, unsuccessful.

What’s the Difference Between a Feral Cat and a Stray Cat?

Feral cats have generally not had much (if any) human contact. They are the offspring of lost or abandoned pet cats and, unneutered, they go on to spawn new generations. In most cases, they have become adept at fending for themselves and will often look healthy and well-fed.  They generally remain afraid of humans.

Stray cats have lived with people at some time in the recent past.  They are often friendly and seek out human interaction.  Most of them have not learned to fend for themselves and might look disheveled and thin.  Stray cats can more often be adopted into new homes.

Although none of these points is always true (feral cats may act more friendly toward a well-known caregiver), there are some helpful tips to identify the difference. 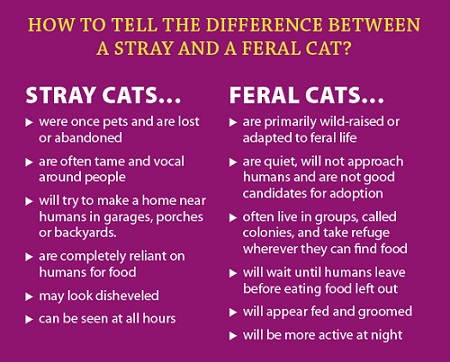 Why Can’t the Cats Be Taken to the Shelter?

Feral cats are generally afraid of humans, which means they aren’t good candidates for adoption. There are already so many loving, friendly cats needing homes, it’s very difficult to find homes for cats that don’t want to live with people. Every year, millions of cats are euthanized in shelters because of a lack of homes. Feral cats have adapted to living outdoors, so the more humane thing to do is to let them stay there.

How SPOT is Helping

To learn more about feral cats and why TNR is the best method of handling feral cats, visit these resources from Alley Cat Allies: