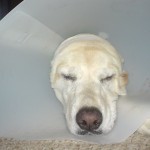 Those were the thoughts running through my mind when the veterinarian told me that my four- year-old, totally WILD CHILD Labrador Retriever, Pilgrim, needed knee surgery and had to be kept quiet for eight weeks. This is the dog, that after an hour of running free in the fields and woods, would come in the house and grab a pillow and want to play keep-away. This is the dog that after a two-mile hike would come into the house and grab a roll of paper towels and destroy the whole thing in a matter of seconds. This is the dog that had to be put on a leash each time a visitor came because he simply could not leave them alone. This is the dog that could run and swim for an hour and then play “body slam” with his Labrador sibling. This dog has a never- ending supply of energy and now I have to keep him quiet for eight weeks. HOW?

The veterinarian informed me that during this time Pilgrim could not go up or down stairs without assistance of a body sling and could only go outside to relieve himself and always on a leash. No exercise period. For the first two weeks he had to be confined to a crate or small room when alone and if I was home could be in the same room with me if the room was carpeted. He was not allowed to run or jump. I wasn’t sure who would be crazier after eight weeks, him or me.

The day of surgery I was a nervous wreck. The vet called to say Pilgrim had done fine and could be picked up the next day. I obsessed over how I was going to keep this overly exuberant eight- pound dog quiet for eight weeks. I bought a puppy pen. I set up a crate. I read a book on teaching pet tricks, thinking if I could keep his mind active, maybe he wouldn’t have such a need for physical activity. The first few days weren’t too bad. Pilgrim was pretty heavily sedated for the pain and to keep him quiet, but the vet insisted I couldn’t keep him on these drugs for eight weeks. One of the problems with this surgery is that the dogs feel great afterwards and want to go back to running and playing immediately. The surgery, called tibial plateau leveling osteotomy, actually involves cutting the tibia bone into two pieces and putting a plate and screws in it to change the angle of the bend in the knee. The eight weeks of quiet is to allow the bone to grow back together at the appropriate angle. If not kept quiet the whole surgery could be destroyed and would have to be redone. I did not want to have to live through this again so I closely adhered to the vet’s instructions and kept Pilgrim captive in the house on a short leash for eight weeks. Instead of walks I would take him for a ride in the car. Of course, I had to lift him into the car because he was not allowed to jump. I counted the days until he could begin taking short walks. At eight weeks we went to have his knee x-rayed to be sure he could gradually begin to exercise it. Bad news – the bone was healing slowly and Pilgrim needed three more weeks of quiet. I cried all the way home. I so wanted to see this dog run free again. Another three weeks and Pilgrim was x-rayed again. This time good news – he could begin walking on a leash for five minutes three times a day. This exercise routine was gradually increased in both length of time and number of times each day. Finally, 15 weeks after surgery Pilgrim ran free again.  We were both elated.

Pilgrim had two months of freedom when I noticed a slight limp. When researching the first surgery I found out that there was a 30 percent chance that if one knee was bad the other would be too. And sure enough Pilgrim needed surgery on the other knee. I scheduled it immediately and with a little more confidence that we could both live through it.

Pilgrim is now six years old and runs like a two-year old. Those many months of confinement and quiet have paid off. Pilgrim is now free to run each and every day and for that we are both very grateful. Pilgrim is still a WILD CHILD and probably always will be, but at least his knees can keep up with the rest of him.