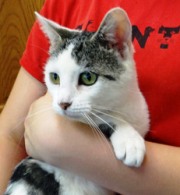 Aggie has been the queen of the cat room for over 300 days. It can be difficult for her to meet people, because she won’t associate with her kitty subjects. She is the first to be let out of her castle in the morning.  That’s  when she gets time to forget she’s the queen and can play like all the other cats.. Then, once the rest of the group is released, she adjourns to her throne atop the highest point in the room, where she sleeps and looks down on the world.

Aggie appreciates the attention she gets from the people in her kingdom. She loves head and chin scratches and will occasionally roll over to let you pat her belly.

Aggie would love to be in a home where she is the one and only cat, where she can relax and remember what it was like to be a young girl, without the stress of always staying above it all.

It’s especially important for Aggie to find the kingdom she deserves, so we will waive her adoption fee and let her go free to an excellent home.

If you’d like to meet Aggie, please consider making an appointment so that she may greet you properly, without her subjects interfering. After all, she is the queen.