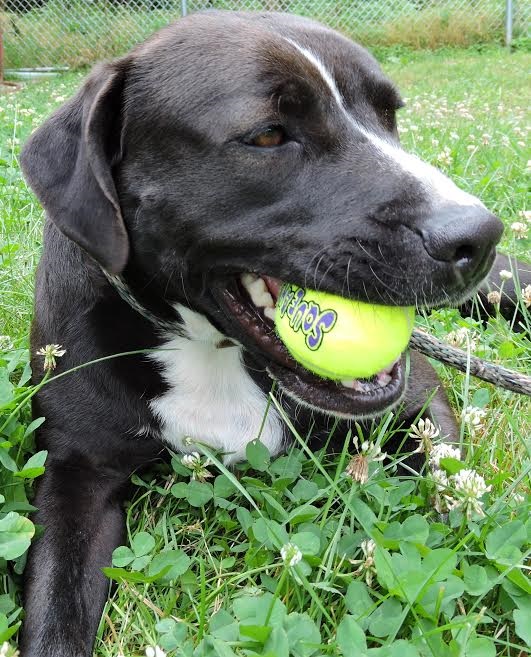 Dogs don’t see the world as we see it. That bright red cardinal on the ground just looks like an ordinary brown sparrow to Fido, but that deer moving in the distance is sure to trigger a response from him way before you see it.

One of the biggest differences between what humans see and what dogs see is variation in color perception. Dogs do see in color, but not as vividly as we do. Humans have receptors in their eyes that are sensitive to three colors individually. These receptors, called cones, distinguish red, blue and green in humans.  Dogs only have two types of cones that see blue and yellow. That means a dog’s color perception is similar to that of a human with red/green color blindness. A dog’s world mainly appears in varying shades of yellow, blue and violet. So an orange ball, which looks yellow to a dog, on green grass, which also looks yellow to a dog, is easy for a person to see, but not so for a dog.

Dogs have fewer cones than humans, but they have more rods which are also receptors in the eye. Rods are sensitive to peripheral and night vision. Dogs evolved for hunting and seeking out prey so their eyes have a high sensitivity to motion at a distance – an impressive 10 to 20 times greater than humans especially at dawn and dusk. On an early morning walk the minute that squirrel in the distance starts moving, your dog will perk up and you’ll wonder what he’s looking at!

Not only that, but dogs have a wider peripheral vision than humans. Their eyes are set more on the side of their head than a human’s. This enhances peripheral vision and creates a panoramic view of the environment. Dogs see 250 to 270 degrees, as contrasted to humans’ 180 degrees.” The trade off is that canine depth perception can be somewhat compromised when there’s less overlap in the visual field.

Another difference is that dogs have less visual acuity than humans. Where humans can clearly see objects from 3 inches to 75 feet, dogs only see clearly from 13 inches to 20 feet.

A website called Dog Vision (https://dog-vision.com/tool.php) has a tool that lets you upload a photo to supposedly experience what a dog would see, compared with what you see.

All in all, humans can see better than dogs. On the other hand, they’ve got us beat by a long shot on the smell and hearing senses.