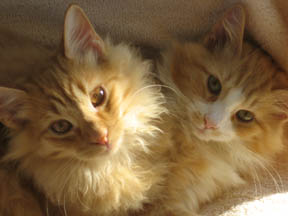 Early last summer I contacted Jaime and the Humane Society about adopting a red, longhaired male kitten. The little guy was being fostered and after a couple of weeks Jaime had to call and tell me that he didn’t make it.  Shortly after that I was in Pittsburgh and while visiting a large flea market ran across a box of free kittens and come home with Poppy a red, longhaired male kitten. Since I already had three cats I was well aware that four was my limit.

A few weeks later Jaime called to tell me about a red, longhaired female kitten, who went to the vet to be neutered and turned out to be a boy. The shelter was very full so she took a chance and called me (well aware that I had already adopted Poppy). By the end of the day, the new baby who we named Tango was becoming part of the family,

About a month later Jaime called to see how Tango was and to tell me that most of the kittens in his litter had died of something called FIP. I now know that FIP can be a deadly disease with no cure. I also know that Tango is healthy and thriving. He and Poppy run and play and drive the older cats crazy. We consider Tango a boneless kitty, because all you have to do is pick him up and he starts to purr and cuddle. He has grown considerably since he joined us and is agile and friendly. In fact he’s never met a cat or a person that he doesn’t like. He has an amazing appetite, often pushing the other cats out of the way so he can get to the food. We know that there is always a possibility that the FIP virus will catch up with him; however, we hope to keep him as healthy as possible and beat the odds. Having two babies in the house has been a joy and Poppy and Tango are best buddies who are growing into beautiful cats.

Best friends: This photo at the top of the page shows Tango and his buddy Poppy enjoying a sunny Sunday afternoon. Tango is on the left.

Tango and Jackson (below): Jackson is also a Maine Coon and rather large. Tango, however, gets along with everyone. 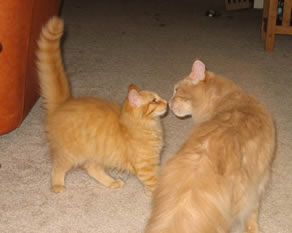 0MiloBlack Kittens at Play at the Brown County Humane Society