Coonhounds: Perfect in Every Way

(Submitted by Susan and Doug) 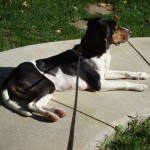 Doug and I had decided to adopt a dog and, within weeks, Calvin came to live with us. Doug had chosen Calvin from the “Courtesy Posting” on the Brown County Humane Society website, but I initially overlooked him (not even giving him a second thought because he was a “Coonhound”). I thought, I don’t want a hunting dog, but I was so very wrong! If all coon dogs have the personality of Calvin, they are perfect in every way!

Doug encouraged me to at least meet Calvin before ruling him out. It was love at first sight. He came to live with us soon 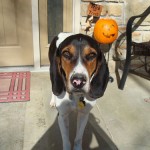 afterward. The first few weeks he was with us, I thought, what have I done? I hadn’t had a dog for many years and his energy level was/is very high. We had only had him for about a week, maybe less, and Calvin backed out of his leash, took one quick look at me like “Am I really loose?” and darted off into the direction of his previous sighting of some deer. I was panic-stricken! Fortunately, I had spoken with another coonhound owner, just days before, and she told me that the great thing about his breed is they always come back home. I just kept reminding myself of this and kept calling and checking for him throughout the evening hours (of course he got loose just before dusk, and Doug was at work, so I was searching with a flashlight). I would hear him barking at various locations, catch a glimpse of him running happily in and out of the woods as those eyes reflected off the flashlight until I finally decided I needed to just go to bed. I checked one more time, and here came Calvin slowly trotting up toward the house! I was so glad to see him but wanted to scold him at the same time. It wasn’t soon afterward that we purchased the Invisible Fence and life has been absolutely wonderful since. 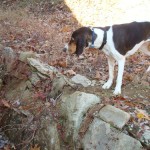 He definitely knows his limits now and is such a joy to watch as he playfully explores the property. In the warmer weather, he will spend hours searching for the elusive chipmunks that live in the rocks around our home. He will have his nose buried so deep in the rocks that he never sees the little critter scatter off from behind another rock. He keeps us very entertained. He will sometimes just be outside barking to hear his echo—quite impressive, if I must say so myself!

He is Doug’s shadow when he is doing any type of work around the house, wandering off on his own for a short time and back to see if he can be of assistance to Doug. We have found Calvin to be very “touchy/feely.” He needs to have some physical contact most of the time, either just following us around or needing to physically have contact with us, such as just lying at our feet. But, he also is very good about just relaxing on his bed while we are busy. 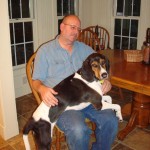 As long as he senses we are close to him, he will just sleep the time away. We do allow him to sit on one particular couch so we will usually sit in that spot so he can snuggle up next to one of us – which he loves! Sometimes he is just like a baby all snuggled up in my arms! He has those beautiful brown eyes and floppy ears that are irresistible!

Calvin, our coon dog, (my grandson likes to call him “Calhoun”) has been an absolute joy to us and I cannot imagine ever having another breed of dog as a pet. He has NEVER shown any type of aggression. As I have said, they are high energy dogs so one has to be prepared for this when taking in a coon dog. If they are given the space to run and play or are walked vigorously, they make the perfect pet. We can’t imagine life without Calvin. 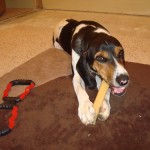