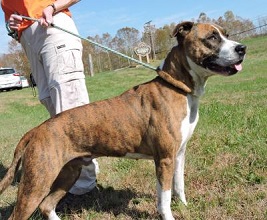 Cool Hand Luke – the Paul Newman of dogs. With his easy-going manner, his strong good looks, and his streak of independence, he’s a real star.  Luke thoroughly enjoys playing tug and chase with other dogs, but if no one wants to play, he’s happy entertaining himself. Quite the retriever, he can spend hours catching tennis balls or Frisbees.

Luke loves his freedom, too.  Give him a chance, and he’ll be off and running. A good fenced-in yard will keep him safe, and still give him some room to run. Regular hikes with the family would be his favorite activity!

Don’t let all that cool independence fool you, though. At the end of the day, you’d better save a space for him on the couch. He’ll want a good nap, some belly rubs, and your company.

Of course, part of what makes him “cool” is that mystery. Luke holds his cards close to his vest and can be wary of strangers, so an attentive family is in order.  Come by the shelter. Cool Hand Luke might be the new star of your family.