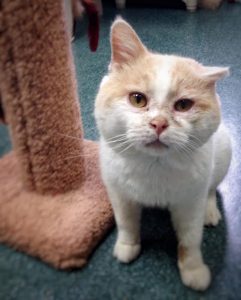 Is Rover shaking his head and rubbing his ears on the couch?  Is Fluffy scratching nonstop at her ears?  Stop and take notice.  These are signs that your pet could be experiencing an ear problem.

Pets are even more prone to ear issues than humans because their ear canals are aligned vertically as compared to a human’s which is horizontal.  This configuration makes them more susceptible to moisture getting trapped inside and leading to infections.

Allergies can be the root cause of many ear infections.  They are commonly caused by food or airborne substances, such as pollen.  Allergies produce an excess of oil on a pet’s skin, including in ears, creating an environment in which yeast and bacteria can thrive and multiply.

Ear infections often cause a pet’s ears to become red and swollen, with a foul odor.  Left untreated it can cause a narrowing of the ear canal that becomes impossible to treat topically and may require surgery.  Sometimes the middle and inner parts of a pet’s ear become infected causing symptoms such as, a head tilt, decreased appetite, lethargy, a drooping on one side of the face, squinting, a raised third eyelid, unequal pupil sizes, abnormal eye movements, difficulty walking or poor hearing.

Ear mites are another source of ear problems.  These tiny insects cause intense itching and are easily spread among pets.  Although they are not as common in dogs, dogs that live with cats that have ear mites have a higher chance of getting them.  To determine if your pet has ear mites, check your pet’s ears for material that looks like coffee grounds.  That’s the debris left from mites.

Polyps and foreign bodies are less frequent sources of ear issues.  Both can cause a pet to scratch at his ear and so are difficult to distinguish from ear infections or mites without a veterinarian’s diagnosis.

Excessive or violent head shaking can cause blood vessels to break and bleed into the space between the ear cartilage and skin of the ear.  The ear flap will appear puffy and spongy.  The hematoma should be treated as soon as possible to alleviate the pain and minimize the chance of permanent disfigurement of the ear. Ear hematomas are usually treated with surgery.

Remember the last ear infection you or your child had?  It was painful!  That’s the same pain your pet experiences, so if you see your dog or cat shaking his head or pawing at his ear, get him to a veterinarian.