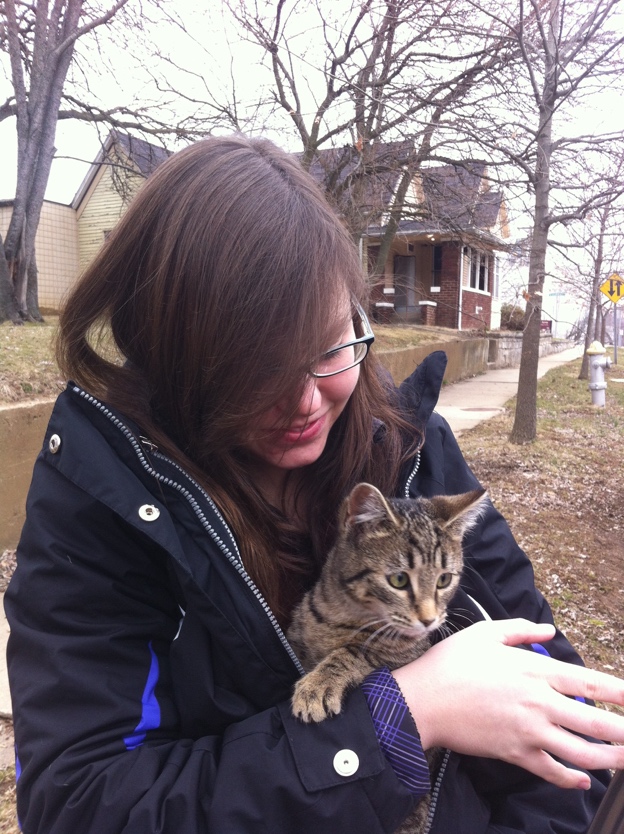 Last year, I decided to teach my cat, Hoo, how to walk on a leash.

I live in Bloomington, Indiana, where there are numerous hiking forests and trails. I love hiking and I wanted to take Hoo with me instead of leaving her at home.

At three-years-old, I knew she may be a little too old to start hiking. Apparently, you’re supposed to start them at a young age so they get used to wearing a harness. But no one told me that, and I was convinced I could teach her.

A little background on Hoo (short for Hoosier) before I go any further.

I got her from a friend three years ago when she was only six months old, and quickly found out she was pregnant (let this be a lesson to get your kittens spayed/neutered as soon as possible so you don’t have five little kittens you need to find homes for!).

She was a shy little stray when I first got her, but after many hours of petting and a lot of tuna she became a loving lap cat who would come if you called her name or meowed at her.

Like any cat, she has an attitude. Most of the time she is loving and affectionate, but sometimes she’s stubborn and doesn’t want to have anything to do with you.

To begin her training I did what anyone my age would do: I went on Google and read everything I could on how to make a cat walk on a leash. I then went to Target and bought a leash and harness and began the training process.

I knew it would not be easy, especially after Hoo started panicking and just rolled over as soon as I put the harness on her.

Despite this setback, I was determined. For a few weeks I did what Google said. I tried putting the harness on her for a few minutes each day and leaving it around the house for her to get used to, but it did absolutely nothing. She had the exact same reaction every time.

After realizing the harness wasn’t going to work, I decided to just stick to the leash. Remember how I said she’s stubborn sometimes? This becomes especially true when the leash is on. The moment she starts to feel tension, she stops dead in her tracks and refuses to budge.

Despite this, my boyfriend, Seth, and I found a way. We decided to go out to Griffy Lake in Bloomington and hike with her. We set Hoo down and she immediately got distracted by all of the sights and smells and stopped walking. So I lightly nudged her with my foot to indicate that we were ready to move on, and low and behold she started walking and following Seth, who was in front of her! 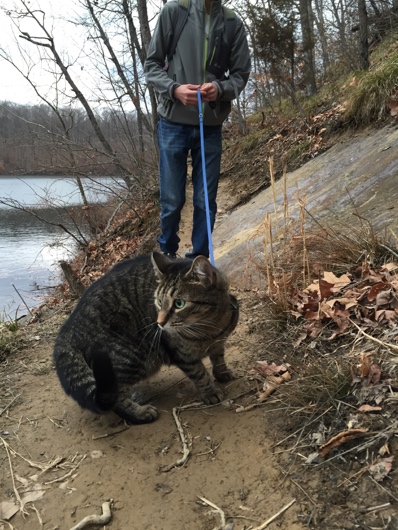 So that became our system: one person walks in front to lead the way while the other stays behind and holds onto the leash – which is there just make sure she doesn’t run away suddenly – and gently nudges her every time she starts to get distracted. That first day, she hiked between half a mile and a mile, which is pretty good for a cat who has lived indoors her whole life!

We’ve tried several times to take her hiking and so far, we’ve had a few really great experiences where she walked most of the way. We’ve also had our fair share of hikes where we carried her the entire way because there were too many people on the trail and they scared her. We also discovered she does better on narrow trails because there’s less space for her to roam and get distracted.

If you want to train your cat to hike, I say go for it! Do note it won’t be easy. Honestly, it took me about seven months to get Hoo to hike with me as well as she does. It would’ve been much easier if I had started training her when she was a kitten, but it is possible to teach an old cat new tricks. My best piece of advice is just to stay with it, because I promise the rewards are worth the effort.